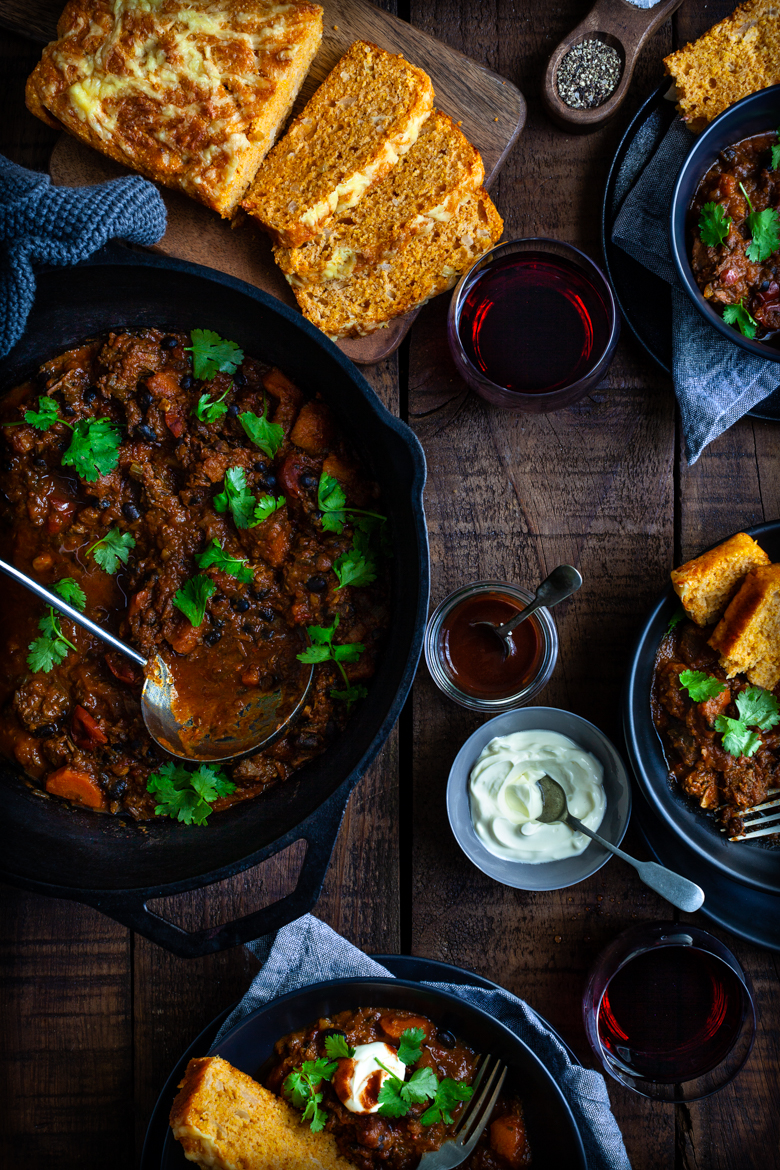 This smoky beef braise is a winner and was a favourite with the Modern Mess members last year. I originally made it to use up turnips and pumpkin in my weekly vegetable box. It takes a bit of time in the oven but makes a lot and freezes well. Perhaps make it on the weekend and just reheat during the week for a quick meal.You could also try it in the slow cooker (see notes below) , though I prefer the flavour of cooking it in the oven.

The cornbread is a bit of fun, delicious toasted with butter too! For those who are meat free, see Keishana’s black bean adaption below. It sounds just as good! Any leftovers make a great addition to a quesadilla.

Season the beef, toss with oil and brown well in a pan in two batches. Remove and set aside.

Add some more oil if needed and add in the onion, carrot, celery and garlic and sweat for 5 minutes until soft. Add the browned meat back in and add the spices and stir to coat.

Add the remaining ingredient ,except the black beans and bring to a simmer.

Transfer to an oven proof dish with a lid (if not already in one) and cook at 140 for about 2.5 hours until the beef is very tender. Add in the drained black beans in the last half and hour. Depending on the dish you’re cooking it in, you might need to add more liquid. The vegetables breakdown and help thicken the sauce. If you do this in a slow cooker, I would reduce the added liquid and tomatoes by half and then reduce it at the end if needed

Season the beef braise to taste and serve with the cornbread.

I topped ours with pickles (or use jalapenos), a little yoghurt or sourcream and some Chipotle Tabasco. You can rest the braise with the lid on while you cook the cornbread or alternatively cook it in advance and re heat gently on the stove.

A note on heat…

The dried chipotle chillies aren’t that hot but add a nice flavour so my kids are fine with them with an added dollop of yoghurt on top. I do like spicy food so I might add in a chopped chipotle chilli in adobe sauce in after I take theirs out. Also I’m quite a fan of the Chipotle Tabasco on top!

½ cup or so grated cheese for the top (optional) Feta is also nice. Diced fresh or pickled jalapenos make a great addition too.

You could try cooking in muffin tins too if you’re short on time. Check them after 10-15 minutes. I have also made this in a cast iron skillet, which gave it  great crust.

You could also add chopped jalapenos, crumbled feta and corn kernels (when in season) into the mix too.

Edit: FEB 2021
Saute the onion and the kernels from 2 cobs of corn in the 3 T of oil in the recipe. Scrap into batter and then pour back into a 24cm cast iron pan. Top with feta and jalapenos and bake for 20-22 minutes at 200 degrees or until set. 2-4 T chopped coriander is also a great addition.

One of my lovely members made a meat free version and sent me the recipe, here is KeiShana’s version.

We used 500gm of cooked black beans to replace the meat. Used 500g diced pumpkin and doubled the remaining vegetables to 2 onions, carrots and 2 cups of celery. A touch extra of the spices were 3 tsp each of cumin & smoked paprika. We love the La Morena chipotle peppers in Adobe sauce so used ONE of those from my original can and red wine vinegar, maple and stock balanced it all out beautifully. Threw in the cinnamon scroll and bought it all to the boil. Simmered until the pumpkin was cooked through 25mins) and served with a dollop of yoghurt and squeeze of lemon or lime juice.

We threw the cornbread into Monster Muffin tins and dinner was served.