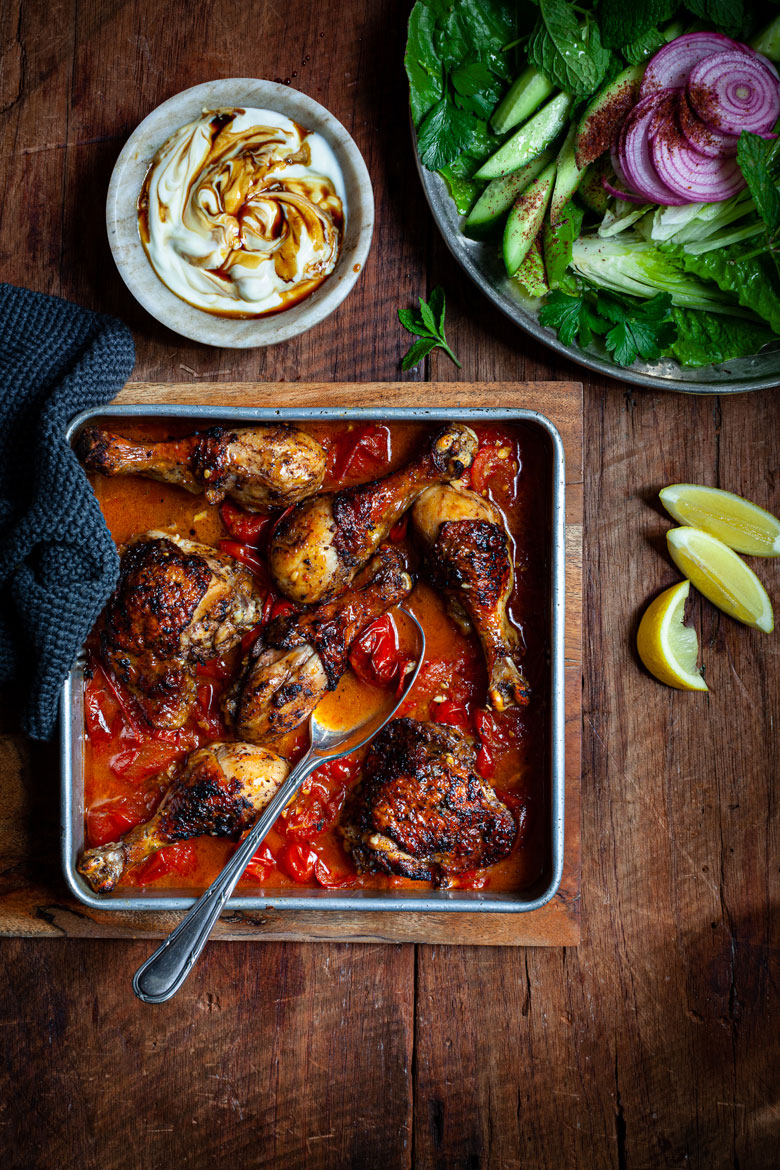 The tomatoes are the star here. Try them by themselves and serve them as a side to fritters. They are also really good tossed through pasta! Great with eggs too. Here I have just turned the tomatoes into a meal. You could also cook the tomatoes for 30 minutes and then add in some fish fillets and cook for 8-10 more minutes.

A nice and quick weeknight dinner.

Marinade the chicken with the sumac, lemon, garlic and olive oil.

Cut the bigger tomatoes and some of the cherry tomatoes in half and place in an oven dish with the chopped or crushed garlic, salt and butter. Place in a 180 oven for 40 minutes. This is the total cooking time.

Once that is in, brown the chicken pieces in a pan. Add on top of the tomatoes and cook for 30 minutes or until the chicken is cooked.

Arrange the lettuce, cucumber and mint leaves on a serving plate. Put the onion on top and squeeze over the other half of the lemon and sprinkle with salt and a little sumac.

Mix together the pomegranate molasses and the yoghurt. Season.

Serve so everyone can help themselves. Chopped green chilli and flat breads are a nice addition or try some roasted sliced potatoes in the oven at the same time as the tomatoes.

The tomatoes can be done in advance and re heated if needed. The chicken can be marinated in advance too and the yoghurt can be made.

Make the tomatoes. Slice some potatoes and put them in the oven at the same time. After 30 minutes, crank the oven to 200 add in a handful of olives and some chunks of feta. Cook for a further 10 minutes. Meanwhile sweat a red onion with a garlic clove and add the stems of a bunch of Swiss chard. When tender add in the leaves and season. Make the pomegranate yoghurt.

Add in a drained tin of chickpeas, sprinkle with a little sumac and chilli flakes and top with some fresh herbs – I used basil and parsley.

Serve the potatoes, buttery toms and greens on the table with the yoghurt and let everyone help themselves.